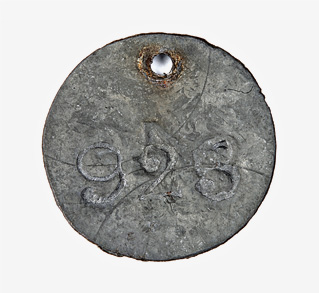 The inmates' corpses were usually buried near the construction sites. Sometimes - as was the case along the Moscow-Volga Canal - the graves were marked with posts and plaques made of metal or wood. In 1989, a man who lived near one such forgotten cemetery gave this grave marker to the "Memorial" Society.

Death in the Camp

Death was a daily occurrence in all of the camps of the Gulag system.

Inmates perished of disease, hunger and exhaustion. Nevertheless, the death rates fluctuated substantially. They peaked during the World War II years, when one in five inmates died as a result of the especially poor nourishment. Regional and climatic conditions had a strong influence on the numbers of dead. The mortality in the icy camps in the Kolyma Region, for example, was significantly higher than in Kazakh Karaganda. The families of the deceased often received no notification of death, there were no humane burials, and graves were not marked with the names of the dead.

How did inmates see the loss of life that had become an everyday occurrence in the camps of the Gulag system?

Depictions of death in the camp

Janusz Bardach reports on death in the Gulag camps

"In the wintertime, death was especially close to all of us. Sometimes he came to us at our places of work, but for some reason more people died at night in the barrack. When it was discovered in the morning that someone had died, the dead man was immediately undressed by the other prisoners. Once a prisoner fell down on the ground during roll call at the end of the day and didn't get up again. I thought he had slipped and the weight of the wood he was carrying had pushed him to the ground. A group formed around him. 'I get the cap', said one man. Others grabbed the victim's boots, his foot rags, his jacket and trousers. A scuffle broke out over the underwear. Hardly had the prisoner been stripped down to his skin when he moved his head, raised his hand and said, in a weak but distinct voice: 'It's so cold'. But then his head fell back into the snow and his eyes took on a glassy expression. The body strippers turned away, unmoved, with the things they had snared. [...] The barrack medics, usually invalids or older criminals, reported the deaths and piled the naked corpses up in the woods until the ground had thawed and it was possible to dig a mass grave."

J. Bardach (1919-2002), sentenced to death in 1941 on charges of alleged espionage, later commutation of punishment to ten years in camp in the Kolyma Region, early release in 1945