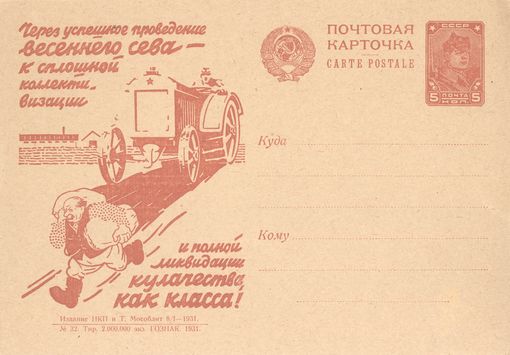 “With a successful spring sowing to the uninterrupted collectivization and total liquidation of the kulakdom as a class!” 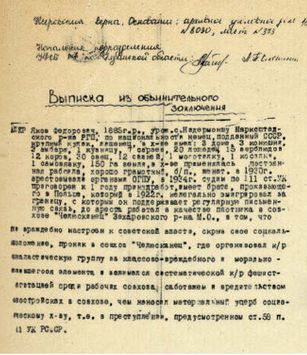 Bill of indictment against Yakov Mayer, 1935

“Mayer Yakov Fyodorovich, [...] owned: 3 houses, 3 stables, 3 barns, 1 blacksmith shop, 7 sheds, 20 horses, 15 camels, 12 cows, 30 sheep, 12 pigs, 1 thresher, 1 mower, 1 self-binder, 150 h of land [...]; he has a brother, who emigrated to Poland illegally in 1922, with whom he maintains regular correspondence. [...] He systematically engaged in counter-revolutionary fascist propaganda among the sovkhoz workers, sabotage, and wrecking at construction sites in the sovkhoz, resulting in material damage to the socialist economy, i.e. a crime under Article 58 para. [...] of the Criminal Code of the RSFSR.”

Yakov Mayer was born to a peasants’ family in the Volga Region in 1885. In the Soviet Union, not only relatively prosperous peasants but nearly all independent farmers were referred to as “kulaks”. Drastic sanctions were imposed on those who resisted collectivization. In 1929, Yakov Mayer also fell victim to the so-called dekulakization campaign. He was disenfranchised and his entire property – farmstead, land, cattle and farm equipment – was confiscated. In 1930 he was banished from his village, and in 1934 sentenced to ten years in camp for alleged espionage and counter-revolutionary activities. In 1943, two years before the end of his prison term, Yakov Mayer died in the Gulag. No photos of him have come down to us.